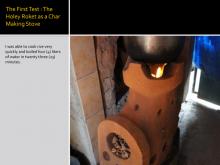 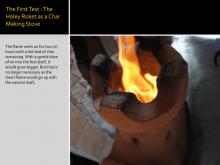 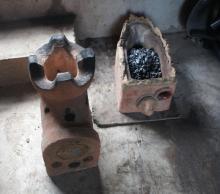 Joshua B. Guinto in the Phillippines used the Oblak Holey Roket stove as inspiration and created a stove with an extra compartment to store char until cooking is done and the char is sufficiently cooled. He has done a wonderful job of writing up the results in the attached pdf.
From his conclusion:
The Charmaking Stove is Born!

Reinforcements on the Holey Roket Stove 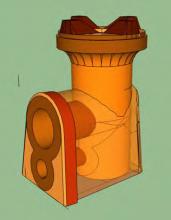 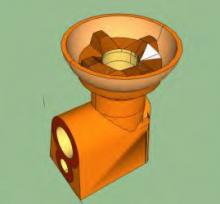 1 The Basic Mechanisms of the Rocket Stove. With the lessons from people like Rok Oblak, Richard Stanley and the Aprovecho Institute the author began learning to build the holey roket stove in his workshop at Daet, Camarines Norte. With sheer perseverance and amidst scarcity, he was able to create several models and delivered skills training to poor people in Camarines Norte, Sorsogon and recently in Bulacan.

2. Among the many feedbacks from the users are the limitation of the holey roket stove in terms of (1) fragility in handling and (2) capacity to receive bigger loads when cooking for bigger occasions and events and for food business. In response, one of the models was picked up for reinforcements. 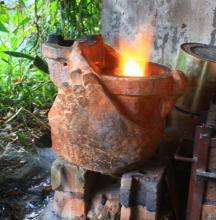 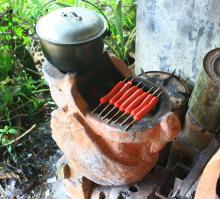 Also take a look at http://www.stoves.bioenergylists.org/Holey-Roket-2013
for other pictures of this type of stove.

and has been making improvements to the design detailed in the pdf, and has these lovely stoves made with the help of the artists he's been working with in the Philippines.

These are the features that he's working to include in the latest batch of stoves: 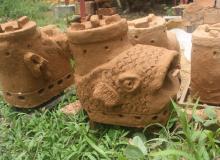 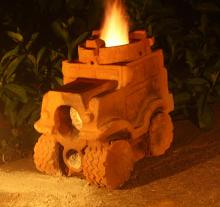 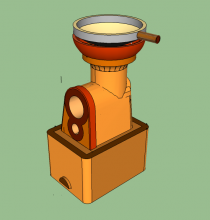 See even more pictures at http://www.stoves.bioenergylists.org/Phillipines-Holey-Roket

The first two stoves in the attached i already am making since the past years. And recently, i have been teaching women and soon their husbands to also make their rocket stoves here in the province of Bulacan under a disaster preparedness program by the Save the Children International. They also make their own designs of flowers, castle towers, chess characters, and faces into their stoves.

the drawing in the third attachment is a prototype in process. It is a Holey Rocket Stove with a char pocket on the side and a box as a platform. I hope to finish it in the coming weeks.

From Rok Oblak, How to Make the Holey Roket Stove

Instructions and some beautiful examples of the Roket stove can be found on Rok Oblak's Web site: http://holeyroket.wordpress.com/

The Holey Roket technology promotes using biomass briquettes and their hole as the key feature of an efficient cooking system. The flames coming in the combustion chamber are condensed within a small space (scheme) providing higher heat output and therefore better combustion of toxic gasses like Carbon Monoxide (CO). 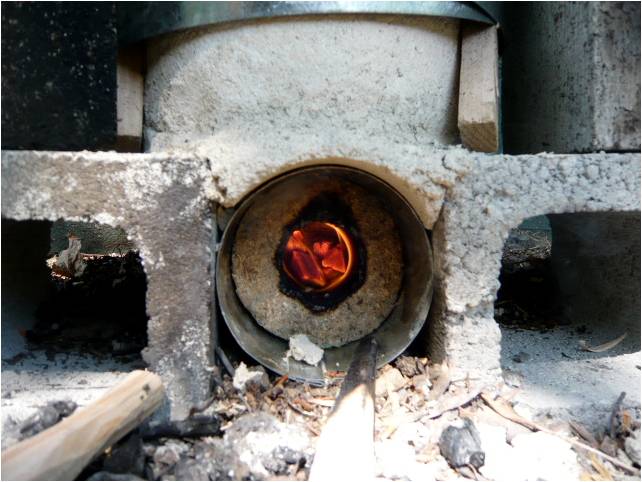 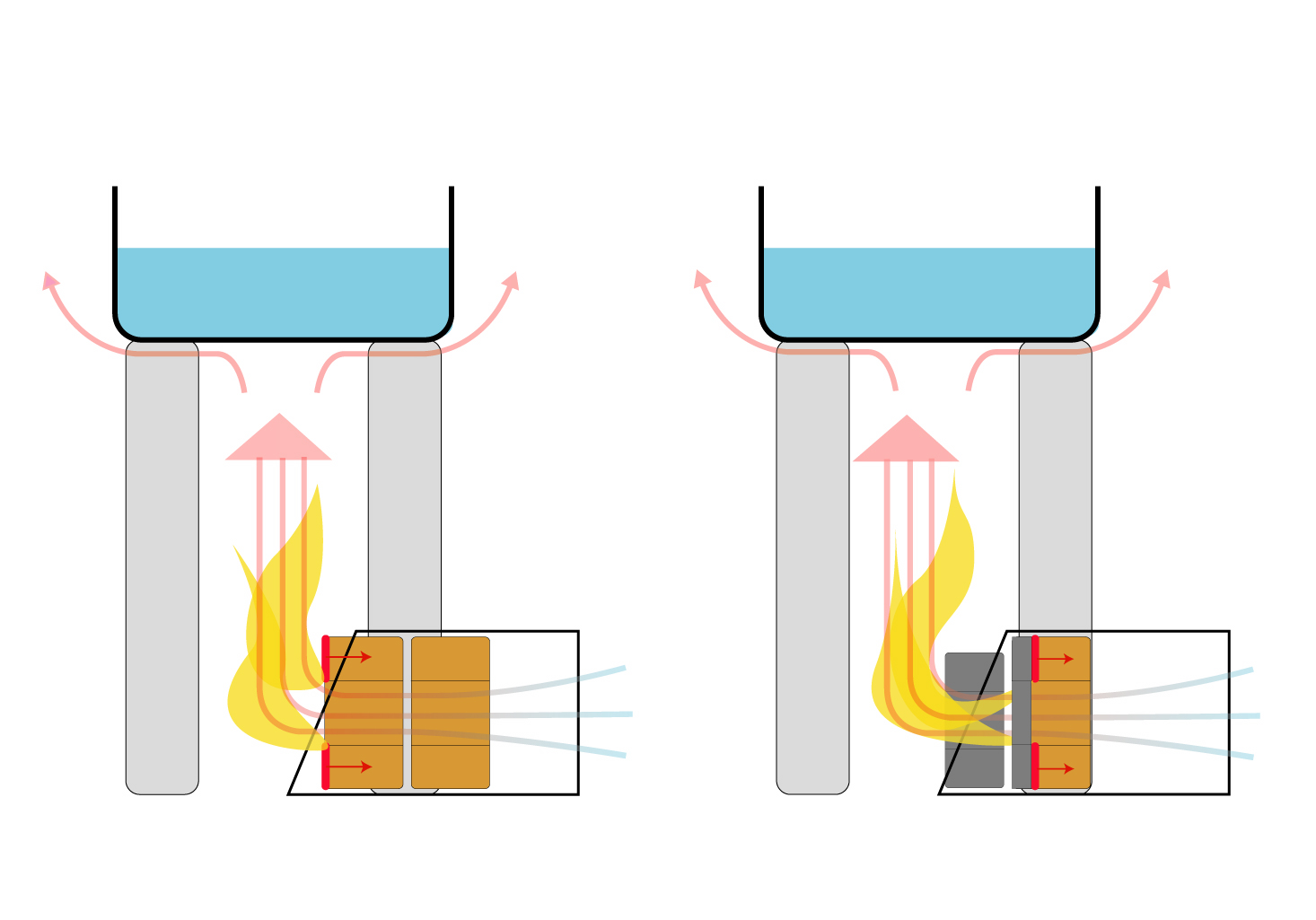 This prototype was to check the hole of the briquette and how gasification can do a nice job. As said, starting the fire with few small sticks and then after preheating the chamber, briquettes ignite by themselves and burn throughly. You can help flames with having a stick in the hole while burning. I really liked how the briquette retained its shape after it burned out, so you could still push the next one it without preventing the draft..

But the briquette burned with the surface lit from the combustion chamber, as Larry predicted. You could literally walk away of the stove with the consistent flame going on all the time (I guess the briquettes were good quality :) The air inflow was only through the hole of the briquette.

Funny was, that even when one briquette burned out, the next one ignited and the airflow continued through the hole of the first briquette. 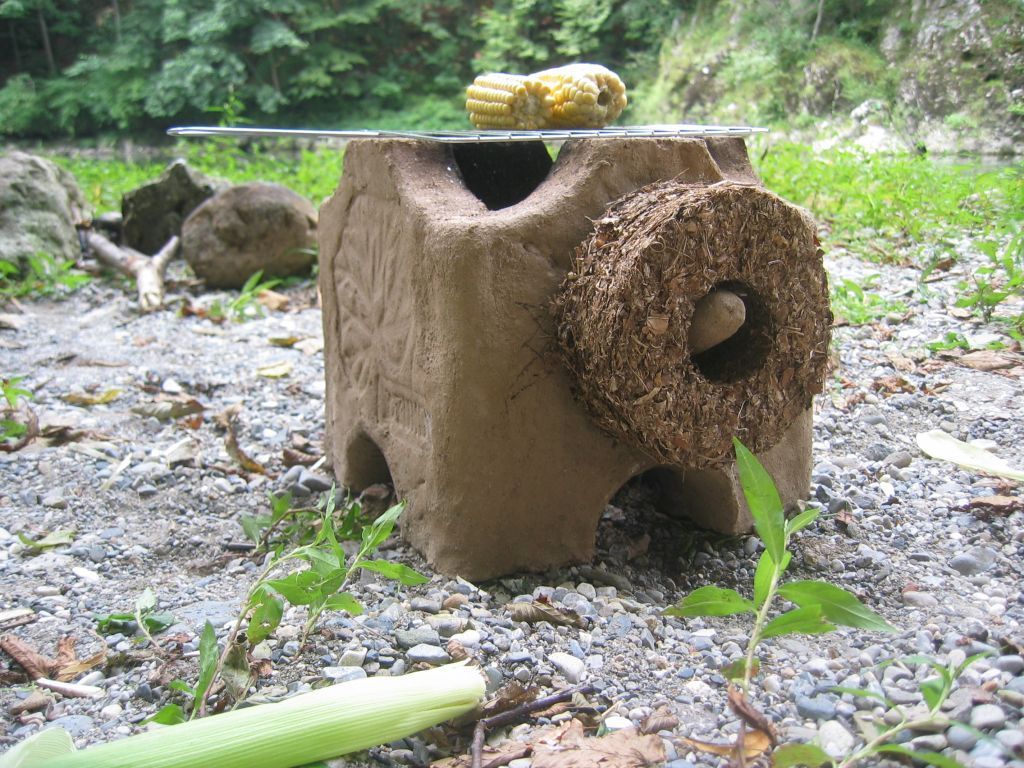 Mdula or Modular Mbaula (stove) is a design project aiming to simplify the construction of an efficient household mud cooking stove for extreme rural areas. It is based on a Do-It-Yourself (DIY) construction techique using a simple wooden mold.

Rok Oblak has started a blog on the development of the Mdula at:
http://mdulastove.wordpress.com/

Copyright © 2006 - 2021 All Rights Reserved by the Original Contributor, Creator and Copyright holder.

Copyright is retained by the original contributor to the discussion list and web site.

Thanks to Alex English for the original (Crest/ REPP) biomass stoves site design.

www.trmiles.com
Specializing in the Development of Biomass Energy and Environmental processes.